Tito Mboweni Appointed on Board of South Africa Zijin Platinum

African Gas a ‘win-win’ Clean-Energy Alternative for the West

Traditional fishermen in the Olifants River estuary are alarmed at a decision by the government to grant prospecting rights to controversial Australian mining company, Mineral Sands Resources, on the northern bank of the estuary. This is the third largest estuary on the South African coastline and one of the country’s most pristine estuarine systems.

The estuary, also host to the largest salt marshes in the country, is listed as a Critical Biodiversity Area by the South African National Biodiversity Institute (SANBI), although this does not confer any formal conservation status on it.

Objectors to the approval believe that prospecting is the “thin edge of the wedge” and that if it proves successful, mining for mineral sands in this area will inevitably follow and will result in severe long-term damage to the estuary, the adjoining coastline and the surrounding area.

They are concerned that mining here will seriously affect the implementation of a formal conservation management initiative for the estuary that has been nearly a decade in negotiation and planning, as well as degrading sustainable ecotourism opportunities already on offer – like those exploited by the 2018 Expedition Africa world adventure racing series.

MSR also operates the Tormin mineral sands mine to the north of the prospecting area, where it is currently applying for “Section 24G” approval for engaging in certain “listed” mining activities without the necessary environmental authorisation.

MSR’s environmental consultant ,Adriaan du Toit, who compiled the Basic Assessment Report on which the prospecting authorisation is based, dismissed concerns of possible environmental damage.

The Olifants River estuary, looking west towards the mouth with part of the proposed prospecting area on the northern bank in the background. Photo: John Yeld

But West Coast environmental activist and conservationist Suzanne du Plessis, an active member of the Olifants Estuary Management Forum which she chaired for three years, said she believed that unless the department’s approval was reversed on appeal, it would result in a “catastrophe”.

Arguing that the approval had been granted on the strength of an assessment report that was little more than a desk-top study and that had not included updated SANBI maps, among several other shortcomings, Du Plessis said: “You can’t do that for such a critical biodiversity area.”

The application to prospect for the same heavy minerals that are mined at Tormin (ilmenite, zircon, rutile, garnet and leucoxene) was filed in April 2016. It involves two properties totalling nearly 4,500 hectares with a substantial coastline and some 15km of the northern bank of the Olifants River estuary.

The authorisation for prospecting, signed on 11 May this year by the regional manager of the Department of Mineral Resources, took registered “Interested and Affected Parties” by surprise – particularly because the final assessment report had not been released beforehand. It only became public through a Promotion of Access Information Act (PAIA) application to the department by Du Plessis on 19 March this year, after 14 months of requesting information from Du Toit and the department. The report was eventually delivered to Du Plessis on 5 May, less than one week before prospecting was approved by the department.

Several of those concerned believe the public participation process – and therefore the department’s approval – is flawed, and are appealing on both substantive and procedural grounds. Under the government’s controversial “One Environmental System” for the mining industry, the appeal authority for any prospecting or mining rights issued by the Department of Mineral Resources is the Minister of Environmental Affairs, Edna Molewa. Once an appeal has been received, no prospecting may be undertaken until it has been adjudicated. 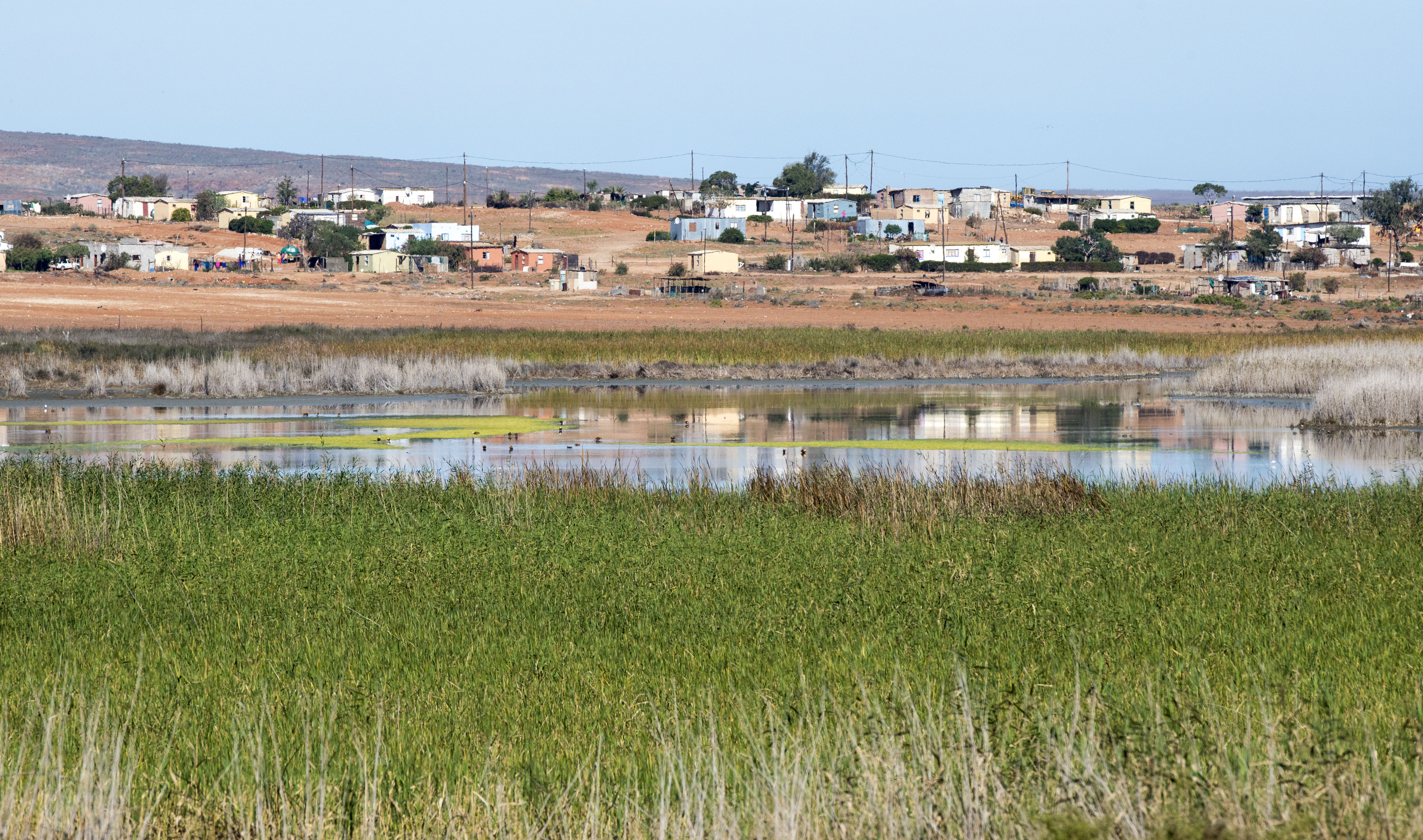 Part of the village of Ebenezer on the Olifants River estuary, where scores of families still depend on traditional fishing as a major part their livelihoods. Photo: John Yeld

In terms of the authorisation, MSR is allowed to drill 200 prospecting boreholes to a maximum depth of 30m, only on existing farm tracks. The boreholes must be rehabilitated immediately after samples have been taken. A “no-go” buffer area of at least 300m must be demarcated between the prospecting areas and the Olifants River, among other conditions.

According to the assessment report, the area under application is classified as a mining development zone under the West Coast Spatial Development Framework and the Matzikana municipality’s Spatial Development Plan. The nearest borehole will be 1.1km from the estuary and more than 700m from the banks of the Olifants River, the report states in response to some of the concerns raised in early comments by interested parties. “No impact on the Olifants River or estuary will take place,” it states.

But such broad denials do not satisfy opponents of the plan, and particularly not traditional fishermen from the Ebenezer and Papendorp communities on the southern bank of the estuary. These apartheid-era Group Areas Act victims, some of them now successful land claimants, derive a substantial part of their livelihoods from fishing in the Olifants River and they say mining is incompatible with their traditional way of life. 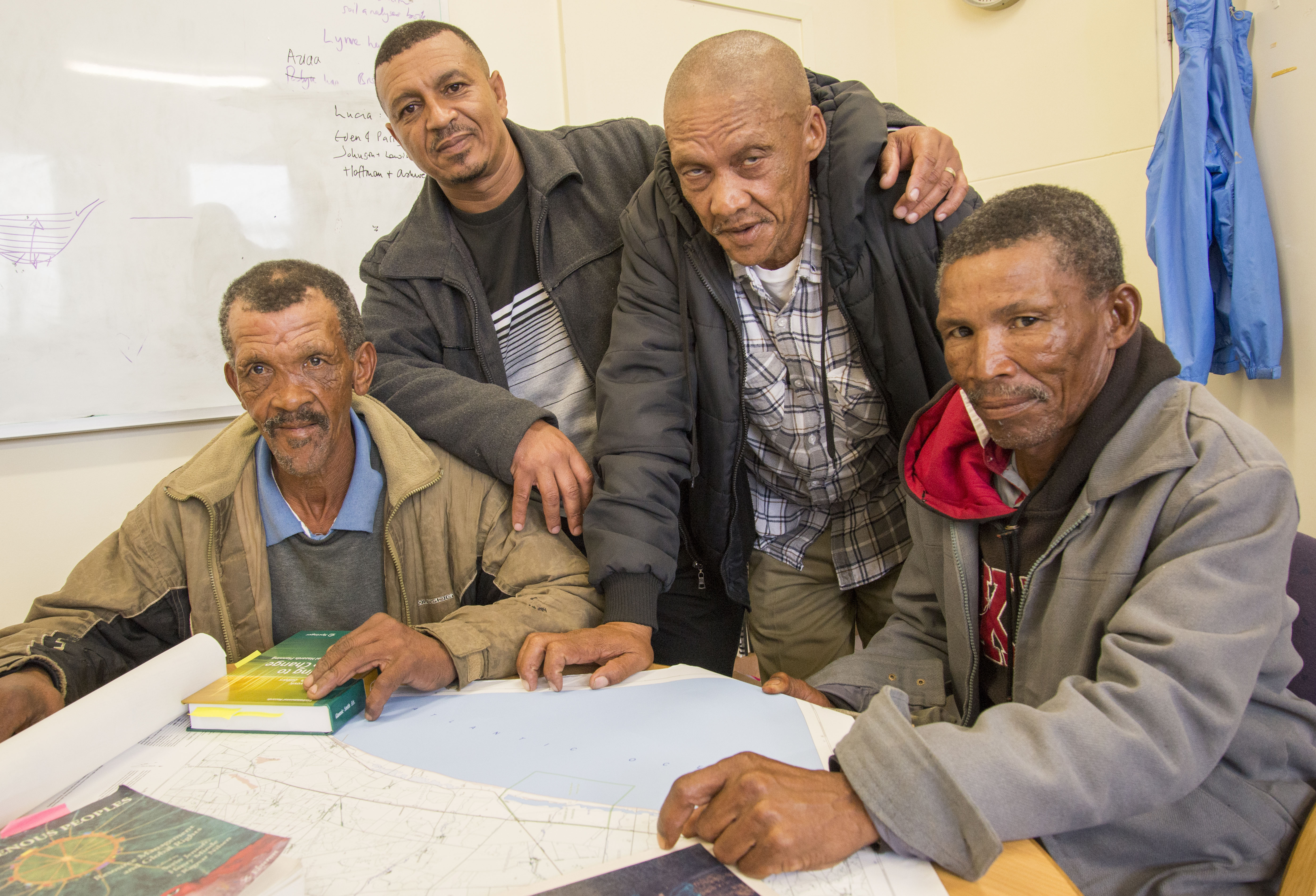 Ebenezer fishermen Petrus Koordom, right, Isak Pieters, left, and Daniel van der Westhuizen, second right, with Nico Waldeck from Abalobi mobile app initiative. They travelled to UCT last week to discuss how to oppose prospecting and mining next to the Olifants River estuary where they earn part of their livelihoods. Photo: John Yeld

One of the fishermen, Isak Pieters, confirmed they had attended the single public meeting about the prospecting held at Lutzville on 17 August 2016, but said he was “disappointed” that the mining company and Du Toit had not engaged directly with their fishing community as requested. “People have been making a living out of the sea for so long now, and they didn’t even see the necessity or have the courtesy to reply to us. It’s like we’re nothing in their eyes.”

Nico Waldeck from the ABALOBI mobile app initiative which aims to empower small-scale fishers, who drove the three fishermen to the UCT meeting, said they had a right to be concerned “because it’s about the food on their table”.

“Our people know what’s happening – their access is being obstructed. However nicely they (mining interests) sketch it, that’s the reality. It’s about tradition.”

He said subsistence fishing in the Olifants estuary “has been going on for generations and we’ve been preserving it. How far are they going to go? Everything they do will have an impact on the fishermen.”

The article is originally published on Groundup